On the LDS Church’s official website, it says that Isaac was commanded to be a polygamist. View here: http://www.mormon.org/faq/plural-marriage

“At various times, the Lord has commanded His people to practice plural marriage. For example, He gave this command to Abraham, Isaac, Jacob, Moses, David, and Solomon (Doctrine and Covenants 132:1).”

This is interesting, because according to the Bible, Isaac only had one wife, Rebekah (see Genesis 24). Isaac did not practice polygamy, like Doctrine and Covenants says he did.

Mormonism teaches that “…Isaac… and Jacob… have entered into their exaltation, according to the promises, and sit upon thrones, and are not angels but are gods.” (D&C 132:37)

The reason why they are not angels is because they were married. Doctrine and Covenants teaches that Latter-day Saints who do not get married in this life do not become Gods in the world to come because they never entered into marriage (D&C 132:16).

Instead, they become angels, as that same verse says. Verse 17 says, “For these angels did not abide my law; therefore, they cannot be enlarged, but remain separately and singly, without exaltation, in their saved condition, to all eternity; and from henceforth are not gods, but are angels of God forever and ever.”

Mormonism believes that men who do not marry do not become Gods, but angels, after they die. Biblically, men and angels are not the same species, nor can they become one or the other.

If men were created by God in His image and likeness (Genesis 1:26-27), which they were, then how can they enter into a “saved condition” as angels if angels weren’t created in God’s image yet men were? Angels would be a step up from being human, as Mormonism would say, since you would be entering into angelhood from humanity and that would be a resurrected state. Angels are spirits (Hebrews 1:7) and we as humans are made a little lower than the angels as far as degree (Hebrews 2:7), but we as humans were created in God’s image, which is very, VERY special.

If, according to Mormonism, men become angels after they die because they could not abide God’s law and they were not worthy “of a far more, and an exceeding, and an eternal weight of glory,” as Doctrine and Covenants 132:16-17 says, then why should I trust the angel Moroni?

Joseph Smith claimed that an angel named Moroni showed up to him in his bedroom on September 21, 1823 to reveal a message about obtaining the golden plates from a nearby hill outside of Palmyra, New York that was “translated” into the Book of Mormon. The Book of Mormon Introduction says this: “After Mormon completed his writings, he delivered the account to his son Moroni, who added a few words of his own and hid up the plates in the Hill Cumorah. On September 21, 1823, the same Moroni, then a glorified, resurrected being, appeared to the Prophet Joseph Smith…” (emphasis added) 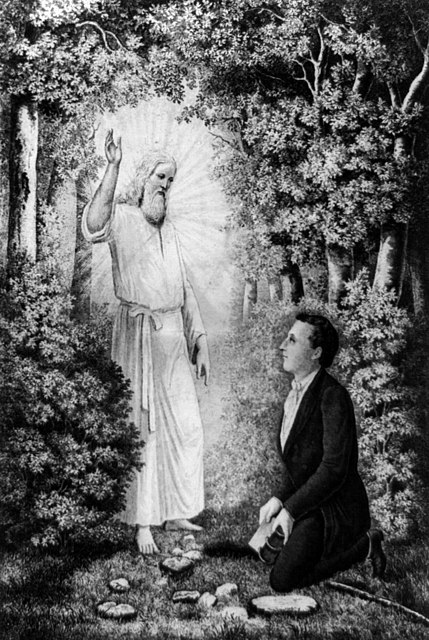 So in other words, Mormonism says Moroni was an actual person who lived and died around 421 AD, who became an angel afterwards and showed up to Joseph Smith.

My question is this: Why didn’t Moroni become a God? If the LDS doctrinal system is true and the Book of Mormon contained the “fullness of the everlasting gospel” like it says it does, then why didn’t Moroni get married so that he would become a God instead of being an angel?

Remember what Doctrine and Covenants 132:17 says about angels, that they did not abide by God’s laws, that is why they didn’t get exalted into godhood. So why did Joseph Smith listen to a messenger who was not exalted to godhood because he didn’t abide God’s laws? What does that say about Moroni’s message to Joseph Smith?

Something to chew on…