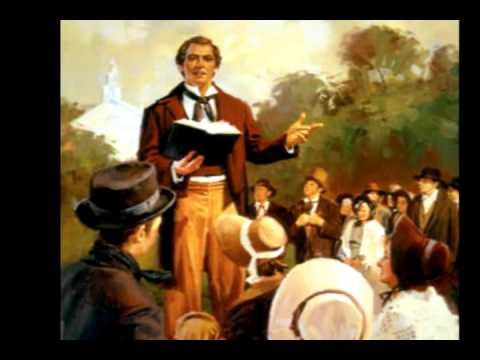 The Book of Mormon teaches the following in Alma 5:27-28:

“Have ye walked, keeping yourselves blameless before God? Could ye say, if ye were called to die at this time, within yourselves, that ye have been sufficiently humble? That your garments have been cleansed and made white through the blood of Christ, who will come to redeem his people from their sins? Behold, are ye stripped of pride? I say unto you, if ye are not ye are not prepared to meet God. Behold ye must prepare quickly; for the kingdom of heaven is soon at hand, and such an one hath not eternal life.”

Taking a look at Joseph Smith’s life, was he humble, and did he really follow the words the book that came forth from his own hands?

Joseph Smith says the following about himself in 1844, very shortly before his death:

“I have more to boast of than ever any man had. I am the only man that has ever been able to keep a whole church together since the days of Adam. A large majority of the whole have stood by me. Neither Paul, John, Peter, nor Jesus ever did it. I boast that no man ever did such a work as I. The followers of Jesus ran away from Him; but the Latter-day Saints never ran away from me yet” (History of the Church, 6:408-409) “…how I do love to hear the wolves howl! When they can get rid of me, the Devil will go also.” (History of Joseph Smith, 672)

Think about that. What does it say, Latter-day Saints, when your founding prophet says about himself, “When [Latter-day Saints] can get rid of me, the Devil will go also?” This is highly significant, ironic, and highly prophetic? After all, words have powerful meaning, especially when spoken forth from the mouth. If Joseph Smith was dropped by the Church of Jesus Christ of Latter-day Saints, then the Devil would leave. This is why the foundation of the LDS Church is built upon Joseph Smith, a man who had such pride. It is not the fact that he had pride that matters, because after all, all of us have had issues with pride at some point or another.

Sometimes we may have gone out into the world to make a name for ourselves instead of giving glory to the Lord God–this is pride. Joseph Smith’s unrepentant pride that boasted with such heresy is just like Herod in Acts 12:21-23 (NIV). In this story, it says the following:

On the appointed day Herod, wearing his royal robes, sat on his throne and delivered a public address to the people. They shouted, “This is the voice of a god, not of a man.” Immediately, because Herod did not give praise to God, an angel of the Lord struck him down, and he was eaten by worms and died.

Joseph Smith gave a sermon in 1844, not long before his death, called the King Follett Discourse. This sermon is filled with blasphemy and heretical teachings about God in relation to man. Go online and read it sometime. After the sermon, a man named Joseph Fielding said this about Joseph Smith’s sermon:

“I never felt more delighted with his discourse than at this time. They said at his oration, it is the voice of a god not of a man.” (Journal of Joseph Fielding, quoted in “The King Follett Discourse: Joseph Smith’s Greatest Sermon in Historical Perspective”)

Notice how the people said of Joseph Smith the same way they spoke of Herod when they said that “it is the voice of a god and not of a man.” Wow! Can you believe that? Herod died of worms because he accepted what the people said. Joseph Smith died a few months after this sermon that was apparently the best sermon he ever preached, in the eyes of the Mormon people.

Mormons, think about what this really means. Joseph Smith’s blasphemy led to his death. Not a death of martyrdom as a hero of the faith, but as God’s letting us know that He will not tolerate a man blaspheming His name and poising ourselves as gods.

The Jews spent 40 years in the wilderness so they could be humbled (Deuteronomy 8:2).We learn in the Bible that before honor comes humility (Proverbs 15:33). Also, Jesus teaches us that if we do not humble ourselves, we will not be exalted. (Matthew 23:12).

We must always keep ourselves a humble spirit and a repentant heart. Start and end your day with those two things, for it will take you far in life!

One thought on “Was Joseph Smith “Sufficiently Humble?””